The Melbourne eSports Open: A day to remember

On 1-2 September 2018 I along with a handful of international students won free ground passes to attend the first-ever Melbourne eSports Open. Held at the Rod Laver and Margaret Court Arenas, the games were a fun weekend experience for gaming enthusiasts, novices and families.

The main event, held at Rod Laver Arena, saw professional Overwatch gaming teams battle it out for the Australian Overwatch Contenders Cup and a prize pool of $67,000. After many closely fought competitive rounds and matches, the Sydney Drop Bears won the tournament beating Dark Sided 4-1 in the final.

Meanwhile, Margaret Court Arena was transformed into a tournament zone, and brought many people together to compete with and against one another in a range of games including popular online multi-player games such as Overwatch, CS:GO, Forza, Rocket League and Fortnite. It also featured a Fortnite dance-off competition and the winners of the battle received a JB Hi-Fi gift voucher for their efforts.

The highlight of the eSports Open was the JB Hi-Fi Game On Zone which saw people lining up for more than one hour just to get into the zone. This area gave the students and other event attendees the opportunity to be the first to play some of the biggest upcoming games including Marvel’s Spider-Man, Tom Clancy’s The Division 2, Sonic Racing and Assassin’s Creed Odyssey. It also featured several live demonstrations and a number of technology companies advertised gaming accessories such as gaming PC’s, laptops and sound systems for purchase at specially discounted prices. As a group, we enjoyed exploring the zone, posing for photos with people cosplaying as popular Overwatch characters and trying the delicious food from the several food trucks on offer.

Despite the cold and rainy weather on the day, the event had a lot to offer and delivered on its promise be a fun weekend experience for all. 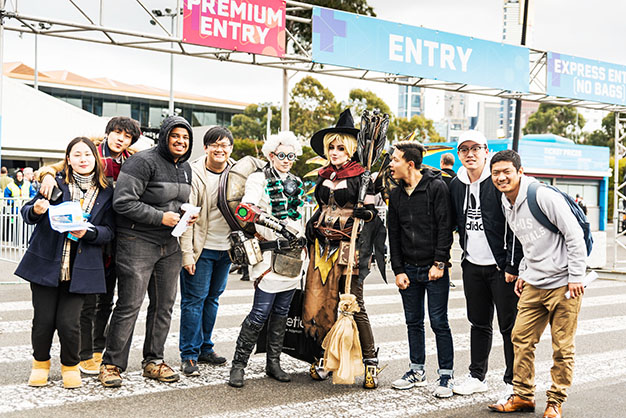 Posing for a photo with Overwatch characters

Having graduated with a Master of Biotechnology, Ruchir is excited about expanding his horizons and gaining invaluable experience in leadership and community engagement. Ruchir loves the diversity and rich culture Melbourne has to offer and enjoys organising events for other international students. Meet all the Study Melbourne Student Ambassadors.