A day at the cricket - interview with Maryam Omar

Cricket is Australia’s favourite summer sport, with men and women of all ages playing in backyards, at local cricket grounds and in large stadiums such as the Melbourne Cricket Ground.

Recently, some of our Study Melbourne Ambassadors attended the Women’s Big Bash League game at St Kilda’s Junction Oval, where they watched some of the world’s best female cricketers put on an exciting sporting show. Study Melbourne and Cricket Victoria invited Maryam Omar, the Kuwait Women’s Cricket team captain and international student alumni, to attend the game with the ambassadors and she gave an interview about her experiences studying in Melbourne and playing cricket in Australia. 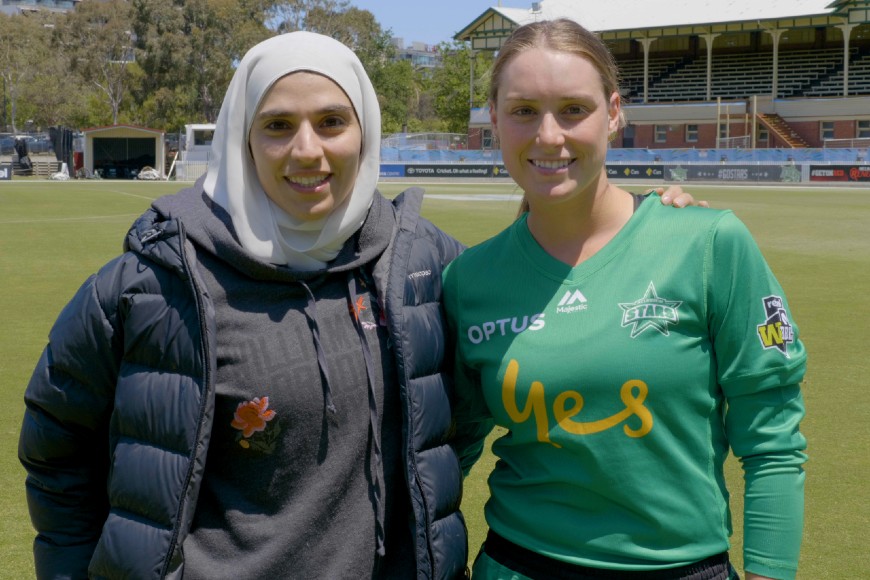 Maryam Omar: On studying in Victoria and playing cricket

“I first moved to Melbourne in 2016, on a scholarship from my university back in Kuwait. I was born and raised in Kuwait, and I played cricket over there, so when I moved, I made sure that my university knew that I had a passion for cricket. My university in Kuwait helped me connect to Central Queensland University’s (CQU) international student team.”

“CQU spoke to me about my interests and hobbies and I made it clear that I wanted to be in Melbourne because it’s the home of cricket. I did my Masters of Civil Engineering at CQU, and they were very keen on supporting students to actually do what they want and be who what they want to be.”

“The university contacted local clubs and I was connected with Essendon-Maribyrnong, which includes some of the players who currently play in the state Big Bash League. After two years, I am now playing with Dandenong in the Premier competition.”

“I have had support from day one and I was very lucky to have that, it was very welcoming and very supportive and as an international student, I thought it was it was really encouraging to be able to do what I love doing but also focus on my studies.”

Maryam: On some of the challenges of being an international student in Victoria

“There have been ups and downs. Moving out of Kuwait was a bit of a cultural difference and getting used to my surroundings and all of that and being away from my loved ones and family was a challenge.”

“There were times when I was a bit depressed about the fact that when things were tough, there weren’t always people around to support me. So I made sure that I surrounded myself with positive people because you don't want to be in negative groups…that feeds into your vibes and your mentality.”

“With studies it was really a challenge to focus on studies and sports, I wanted to make sure that I worked hard to maintain my scholarship. I had to maintain an 85 per cent average, which meant I had to study as much as possible to get over the line. And then with sports, I had to work hard to make sure I maintained performance at the Premier cricket level, because the standard of cricket in Australia is very high, as you can tell from the women cricketers playing today. To compete at that level, I had to put in 100 percent effort. It was tough to do, and it did take a toll on me.”

“Through these setbacks, I learned how to manage my time and plan my time smarter. Here’s an example: I play cricket on the weekend and during the weekdays I work as a civil engineer in an engineering consultancy. If I finish at 5pm, I need to get to training in Dandenong. To do this, I drive to Dandenong very early in the morning and leave my car at the station, and then catch a train to the CBD. I catch the train in enough time to avoid traffic and still make training.”

Maryam: On the differences between playing cricket in Kuwait and Australia

“I’ve mainly played cricket in Kuwait and Asia and the environment was much different in terms of the way the ball bounces and turns and all that. In Kuwait, we were like a big family, but when I came here I had to try and make it by myself, and it meant relearning certain things from the basics.”

“There were times when I would call my coaches back home for advice on what to do, but cricket is my passion, I would do anything for cricket, so I worked hard at it.”

“I became much more confident because I knew what my purpose was and it gave me a lot of alignment in my life. I knew what I wanted to achieve, and cricket shows me what I am capable of.”

Maryam: On what she hopes to achieve

“If my body and time allows me, I would love to play for the State team or in the Big Bash League. That would be the ultimate thing for me.”

Maryam’s advice for other international students

“Surrounding yourself with the right people is very important.”

“There are so many times that you doubt yourself and ask yourself, ‘Do I really want to do that? Do I really want to keep going?’ But you need to be very clear about what you want to achieve. Set a plan and keep your target in mind and not just the process. If you just think about the process, you will never get to the destination.”

“Trust yourself. Backing yourself and knowing what you can achieve is the key thing… And when the opportunity comes you just grab it. So, I would say my only advice would be - be true to yourself.”

Want to know more about cricket and join in the fun this summer?

Cricket is played in three formats – the shorter, more exciting Twenty20 version that takes around three hours, a longer one-day version and a Test Match, which can take up to five days to finish.  In Australia, the professional domestic Twenty20 competition is known as the Big Bash League, and there are both men’s and women’s competitions.

Cricket Victoria and Study Melbourne have teamed up this summer to offer international students studying in Melbourne discounted tickets to the Men’s Big Bash League featuring the Melbourne Stars, one of two Melbourne-based cricket teams.

Check out our events page for more information on each of the games, and details on how to buy your discounted tickets!

See fast-paced cricket at the greatest cricket stadium in the world, the mighty Melbourne Cricket Ground (MCG)! With three hours of non-stop action, fireworks, great music plus loads more entertainment, a Melbourne Stars match is the ultimate night out.

With plenty of fun activities and loads of seating and hospitality options, there is something for everyone.