Future Female conference panellist and Study Melbourne Ambassador Ruwangi Fernando talks to us about her work on gender equity. 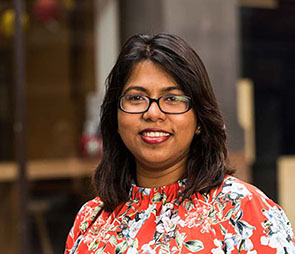 Ruwangi Fernando comes from a background in information technology. She completed her bachelor’s degree at the University of Colombo, master’s degree at the University of Wolverhampton, and is currently a PhD research student and a sessional academic at Victoria University. Her passion to support greater representation in STEM fields have led her to start STEM Sisters at Victoria University. She is also involved in many other initiatives to support women working in the STEM sector.

STEM Sisters is home to a diverse group of female international students and female migrants committed to an intersectional approach for empowering women of colour in science, technology, engineering, and mathematics (STEM) fields.

What is the importance of having such groups?

They’re critical for giving space for women to voice out on their particular experiences, receive support from others, and to give support in return.

In 2018, LeanIn.Org and McKinSey & Company released a report showing how women are vastly underrepresented at every level in the workplace, and the problem is even worse for women of colour. The report states that women are left behind from the get-go. They receive less support from their managers and have less access to senior leaders. There are many studies with similar findings.

This is why I consider these groups critical. In a way, you may term this as ‘networking’. That term often implies inauthentic connection but that is not what I had in mind. For me, networking for women is about meeting other women who want to better themselves. It’s about connecting authentically with others. It’s about learning together how to overcome gender and racial bias. At conferences like Future Female, it’s about getting to know the organisations, sponsors and other professionals who are committed to investing in women.

How can men be feminist allies?

Being an ally should be about action. Therefore, I see ‘ally’ more as a verb, a work in progress, not a noun, which implies a finished product.

What I mean by this is, if a person is sitting on the sidelines thinking about how they would support their daughter, mother or partner, I wouldn’t consider them a feminist ally.

Being an ally goes beyond professing one’s own beliefs. An ally must be a person who acts. They must be active in the movement for greater gender equity. It’s about challenging what they hear, see or witness. It’s about actively promoting gender equity at work, in school, at home. If you work in a STEM field and you see that women are underrepresented in leadership or even in entry-level roles, which is a very real problem, call it out. Take steps towards having a more balanced gender representation for meaningful roles.

And really, you’re not a feminist ally until women consider you as one. Name three female leaders who have inspired you in the way they overcame gender bias to achieve professional and personal success.

I have met, worked with and learn from many inspiring women throughout my life and each one of them have shaped me to become who I am today. I draw my inspiration from three prominent leaders in STEM fields: Mae C. Jemison, Juliana Rotich and Dr. Hayat Sindi, who reached success despite gender and racial discrimination.

Jemison is an American physician and as a NASA astronaut, was the first African-American woman in space. Rotich is a Kenyan technologist and social entrepreneur best known for developing an open-source software platform for crisis-reporting. Saudi Arabian Dr. Hayat Sindi is one of the world’s leading biotechnologists.

Future Female is held on 13 September 2019 at the Arts Centre Pavilion, Melbourne. Ruwangi will be speaking at the session Women Like Me (2:45pm-3:45pm). To buy tickets, visit the Future Female website.